Some images are available in a larger view by clicking on them.
Quick Links to


The designs I was asked to do were fun and creative, and occasionally required some problem solving. Both management and my colleagues were impressed with the quality and speed of my work. Below you’ll see some samples of the designs I created for Bluesfest.

The very first project I was tasked with was to redesign the festival site map and update where the fences, stages, vendors etc. are located. The Operations and Marketing Managers were delightfully surprised to see the quality of the map as well as getting it produced in a timely manner that exceeded their expectations. 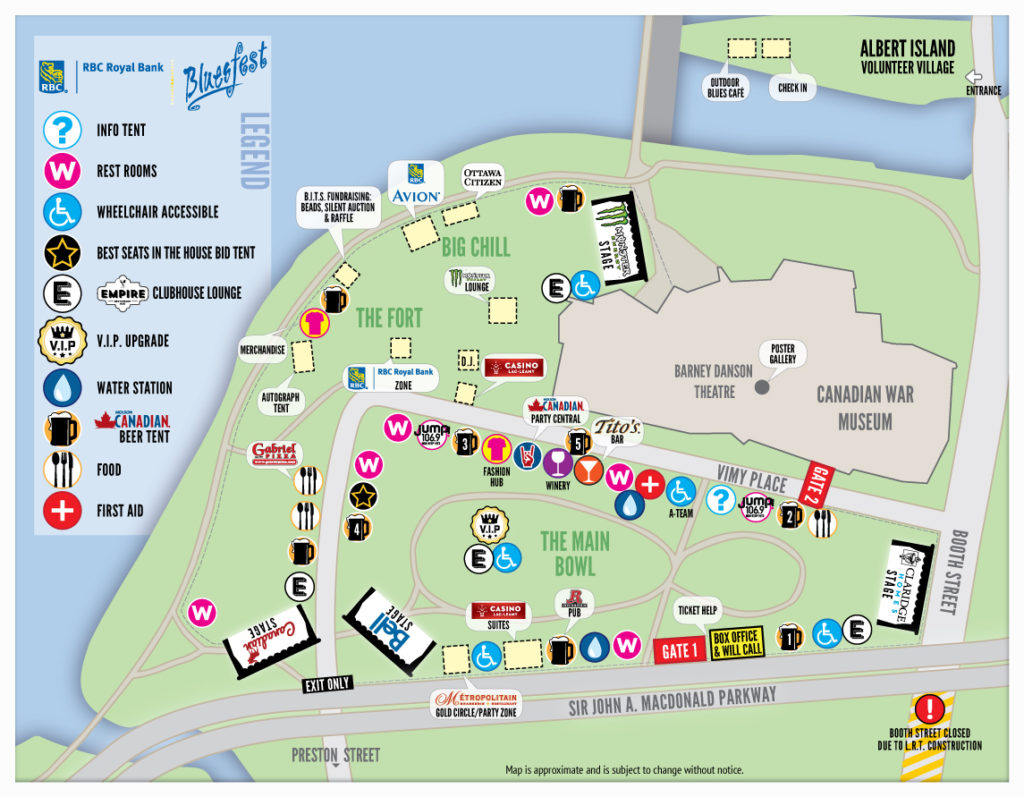 I was asked to improve on the design of the previous years’ program guide and map for Bluesfest. The layout called for 4 folds so that it would be small enough to fit it a pocket or purse.
With my experience I could see that the design could be made cleaner and easier to read. While retaining the overall marquee theme used across all 2015 Bluesfest marketing materials, I used typography and a lighter colour scheme with shading to help to achieve my goal. I improved the accuracy of the festival site map and simplified the detail to only show the important locations with fun icons.

In the end, I was given a lot of positive feedback with the map and new program guide.

Directly below is the front and back of the folded up program guide.

This print piece was distributed daily during the festival because of last minute changes to the schedule. Working to a very tight deadline, I made any final changes and sent each one to the printer the day before. Using the marquee theme, I designed the overall look for the daily grid as well as the small advertisement pieces that changed day to day. The reverse side maintained the look of the larger program guide schedule.
Both patrons and my colleagues commented on how much they liked it because it was so easy to read and it had all the information they needed. 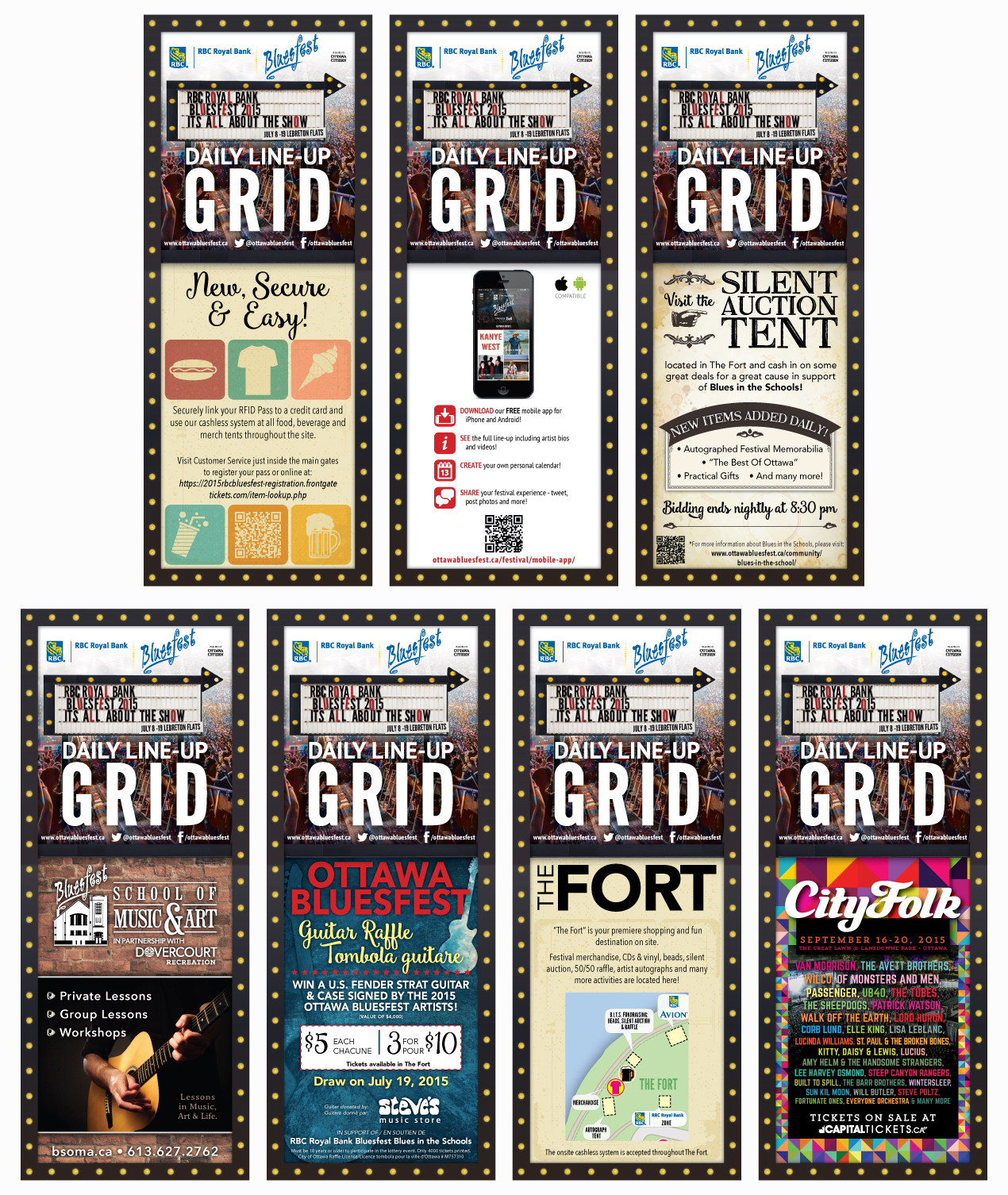 The theme for CityFolk 2015 was a quilt pattern, and multicoloured text which is reflected in my design samples below. It was used on everything from posters and signage to the car deco wrap on the Folk Wagon.

There were a lot of firsts for CityFolk in 2015, including a new name – and because it was the first year that the festival was held in Lansdowne Park, I knew the map was going to need last minute changes once the equipment and vendors arrived on site. Being prepared was key so, prior to the event, as soon as my supervisor returned from a visit to Lansdowne I quizzed him for updates and immediately changed the map. 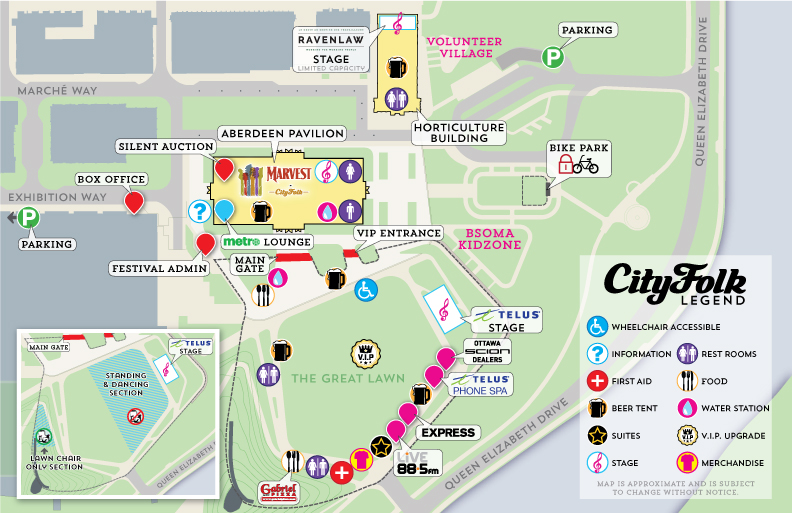 After designing the program guide for Bluesfest, I was asked to do the CityFolk program. The program included the two stages in CityFolk and the 14 Marvest venues. Using the colour coding idea I had with the tourism brochure, it made sense to carry it through to the program guide. It wasn’t easy to get everything to fit, but I was confident it could be done.

Directly below is the front and back of the folded up program guide.

I designed the daily grid for CityFolk and Marvest. The CityFolk front ad space was sold to Warner, but Marvest was able to include the map I designed which added to its convenience. 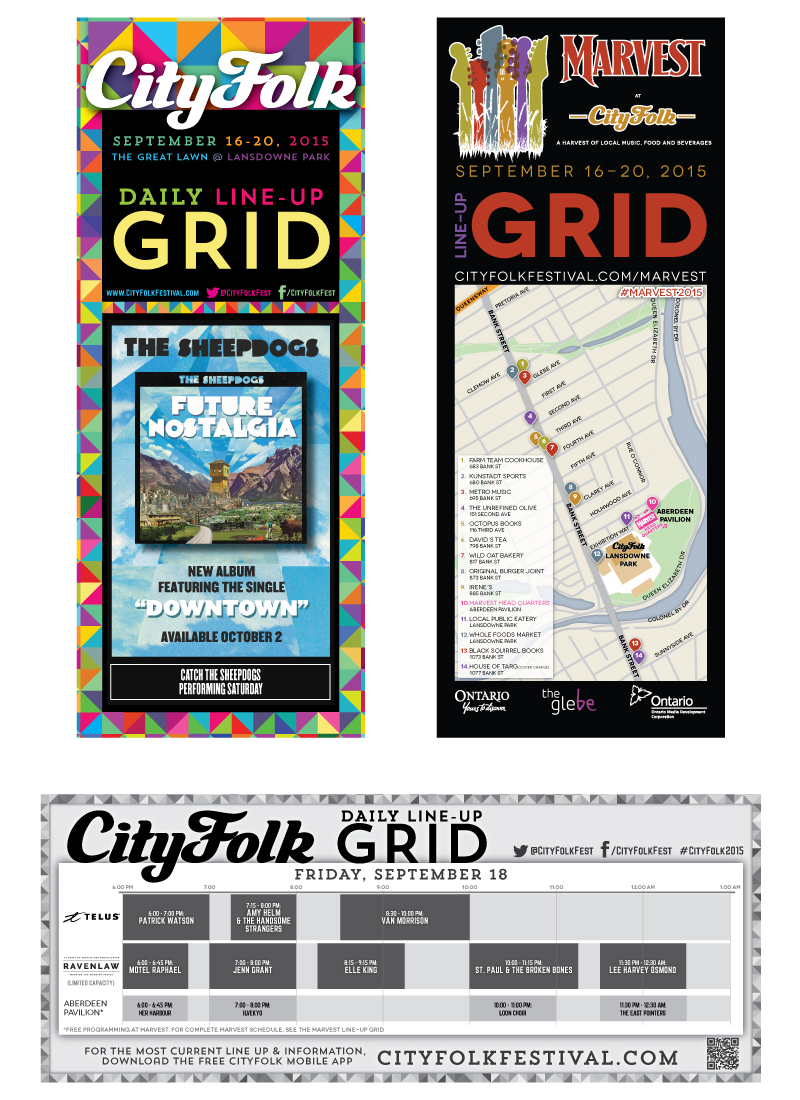 Following the CityFolk multi-coloured quilt theme, I designed and paired the shirt material and ink colours. The final result was great to see at the festival. 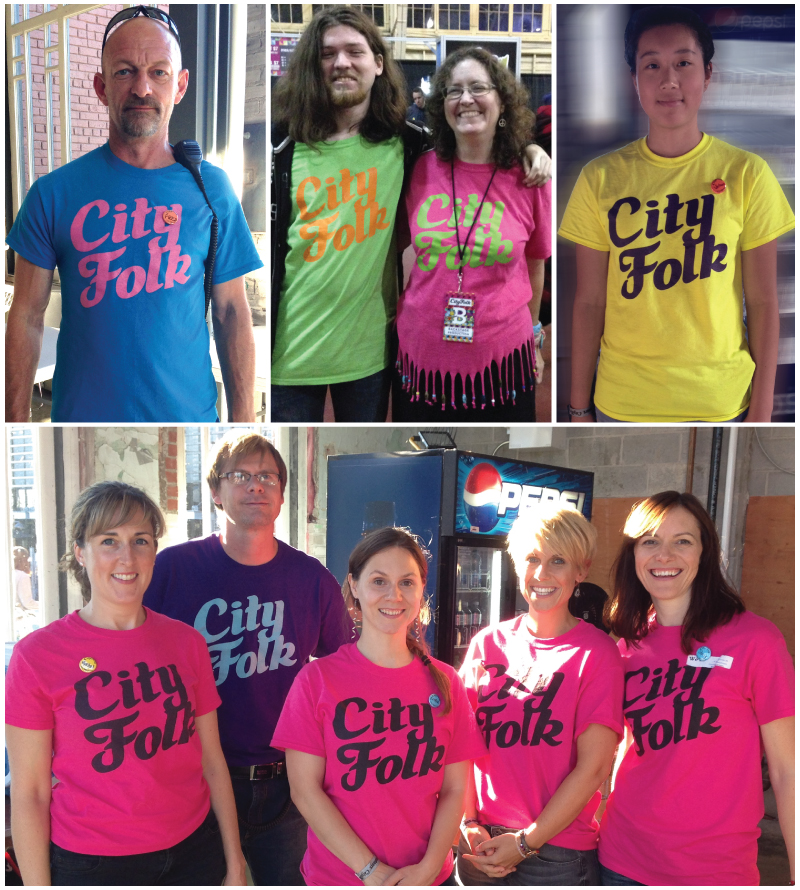 Immediately post-festival, I was asked to design some posters using some photography taken during the event. The Executive Director loved these ones the most and went on to use them to promote the festival in 2016. 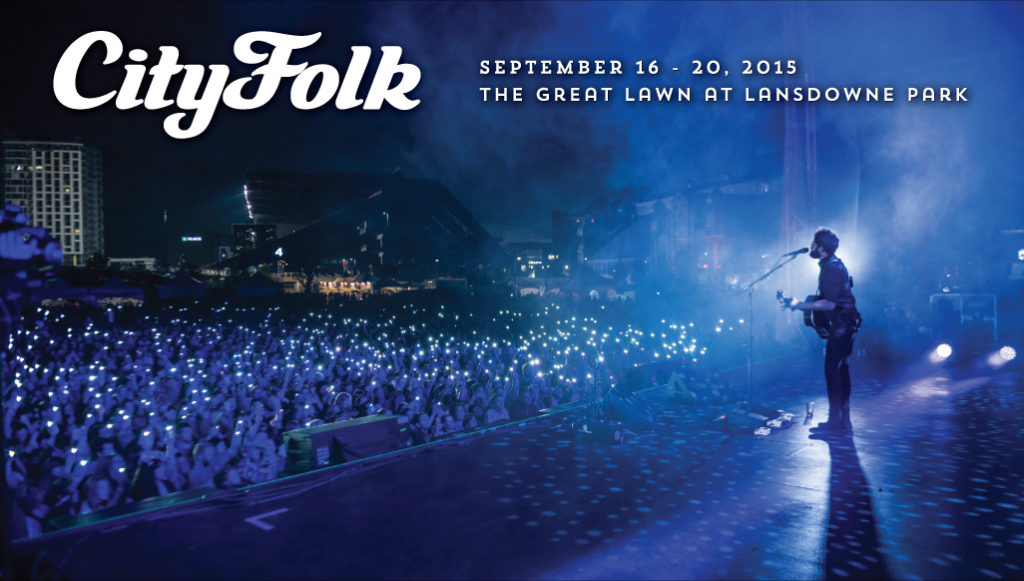 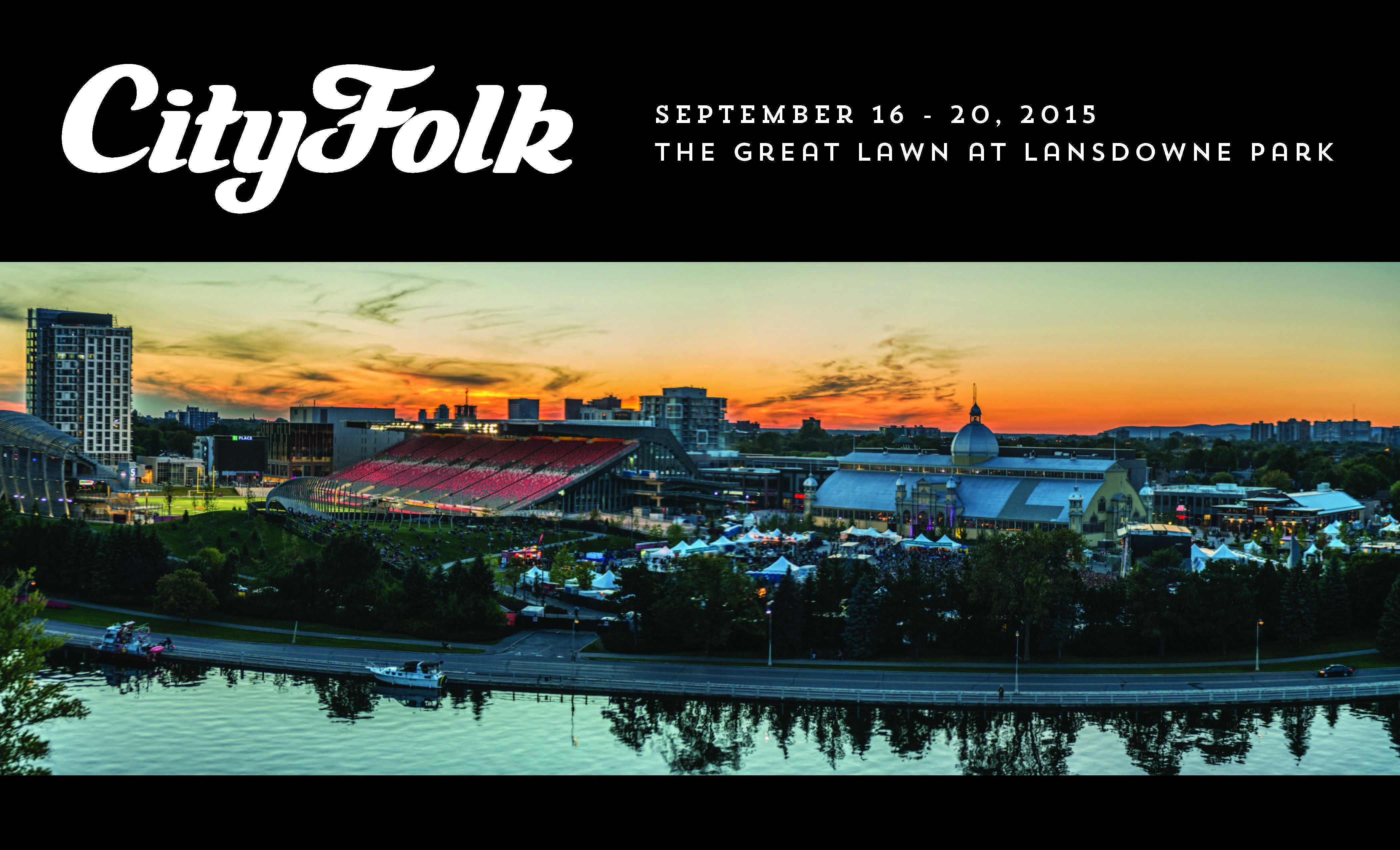 I know what you’re thinking because that’s the first question I asked when I heard the name as well. “What is ‘Marvest’?”.

After learning what Marvest was, I came up with an idea to help with the marketing and branding of the festival using an explanation so the public could quickly learn about it. The design I came up with could be used throughout the marketing materials as well as on the website. I presented my idea to the marketing director, who loved it and it ended up being a very helpful tool when anyone asked “What is ‘Marvest’?”. 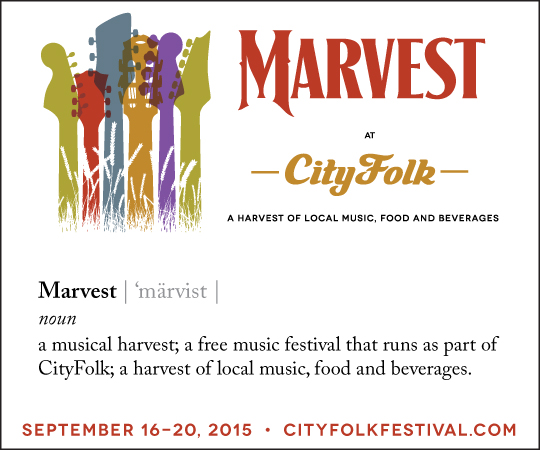 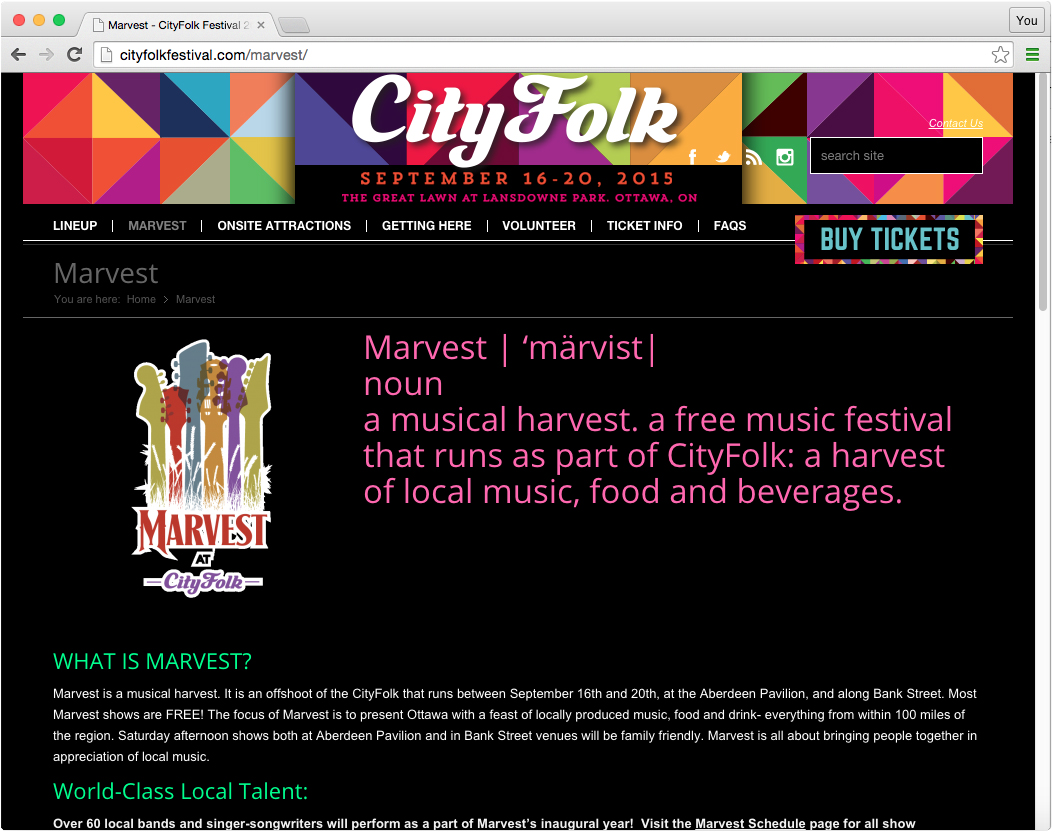 I designed this leave behind piece for the executive director of Bluesfest, Mark Monahan, who has put together a plan to resurrect the Festival Express that originally took place in 1970. Mark had an idea to have had it take place again in 2017 to help celebrate Canada’s 150th birthday. When I designed this peice, it was still in the very early planning stages, a logo, theme or campaign had not yet been created and it was up to me to come up with an initial look.
I selected contrasting typefaces from the railroad era and a classic poster image to give it a reinvented feel, rather than copy the original art nouveau look that was popular throughout the 70’s. The idea was to be a retro-modern twist on the original train tour. 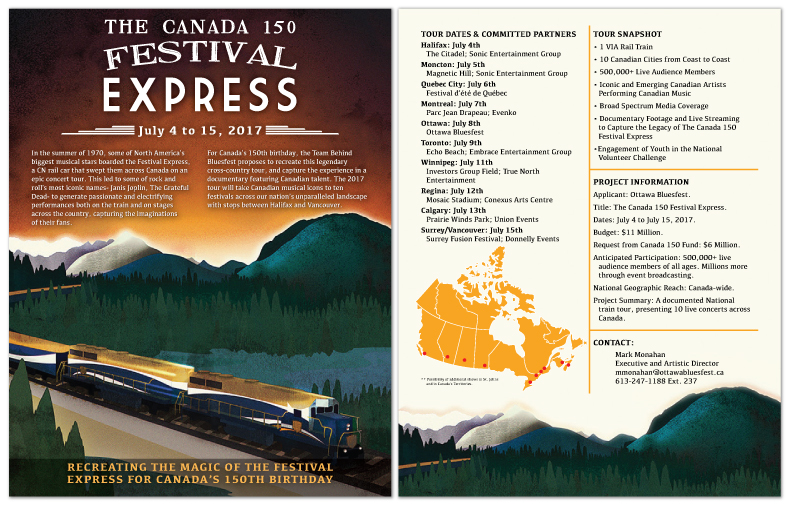